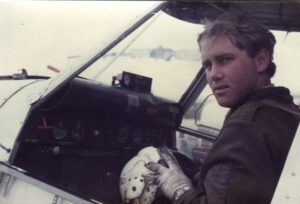 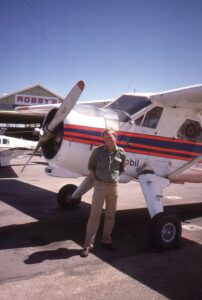 After retraining as a pilot in 1976, John was Operations Manager for the Norfolk & Norwich Aero Cub at RAF Swanton Morley and then a full flying instructor for the Staverton Flying School, Gloucestershire for two years. He was next employed by Howard Avis Aviation at Old Buckenham, airfield, Norfolk as an Aerial Crop Spraying pilot where he first became aware of the fatal dangers of organophosphate exposure as published in the CAA Operations Manual and always took H&S precautions to avoid any exposure. 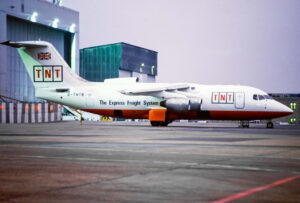 After getting married and believing low flying & chemicals to be fundamentally dangerous, he retrained to fly DC 3 Dakotas and was employed by Air Atlantique on day/night ad hoc freight in 1987 and also flew Maritime Pollution reconnaissance aircraft for two years which included the Piper Alpha & Ocean Odyssey oil rig disasters. John retrained in 1989 to fly the BAe 146 four engine jet for TNT on overnight parcel delivery on permanent night flying and racehorse (Istabraq 1998) delivery around Europe. 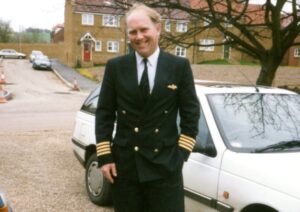 By 1998 he was ready to quit night flying as a result of his permanent exhaustion, so joined Jersey European/British European/Flybe for Air France code share and others with passenger flying, still on the BAe 146. But he still experienced ever worsening multiple chronic neurological symptoms, which other pilots have described as being ‘permanently inebriated’.

John became a BAe 146 Training Captain in 2001 in order to avoid line flying in order to eventually fly a ‘BAe 146 Simulator’. Despite almost daily exposure to visible oil fumes over 16 years from the BAe 146 Auxiliary Power Unit or APU John experienced his first and only ever logged and recorded passenger oil ‘fume event’ in 2002.

Due to rapidly deteriorating health in 2004, he walked off a challenging flight, rather than endanger or risk his passenger’s lives, and was diagnosed with PTSD by Prof Gordon Turnbull of the CAA resulting in him going part time after a short break from flying. By mid-2005 John stopped BAe 146 flying altogether, like a zombie and suicidal at losing his career at the age of 49. Captain Tristan Loraine of BA & BALPA (British Airline Pilot Association) contacted John in early 2006 as he was organising some ‘Toxic air testing’ with University College London (UCL) and needed recently grounded and flying pilot volunteers to be tested.

John had been formally diagnosed with ‘Chronic Stress’ by Professor Michael Bagshaw, a paid industry doctor, but John felt this was not the case, so agreed to be investigated by UCL along with other pilot colleagues. He was extensively assessed along with 26 other BAe 146 & B.757 BALPA pilots with a near 100% hit rate in early 2006.

John finally made a Statement on 22nd May 2006 about his discovery of organophosphate exposure, feeling it was in the public interest that his evidence be made public and he had seen enough evidence to confidently include the key words of ‘Criminal and covering-up’. John also discovered from Google that there had been an international BALPA Cabin Air conference in April 2005, which had concluded published black & white group conclusions of the supposed ‘Truth’.

In June 2006 John first became aware of the hidden term ‘Aerotoxic Syndrome’ from Captain Tristan Loraine, a medical term which had been first defined and published on 20th October 1999 by US doctor Harry Hoffman, a French forensic scientist Dr Jean Christophe Balouet and Australian toxicologist Professor Chris Winder after many years of research of the human illness caused by exposure to the fundamental design flaw of unfiltered, unmonitored bleed air in the 1990’s.

John founded the Aerotoxic Association Ltd. Charity on 19th March 2007 and launched successfully at the UK Houses of Parliament, London on 18th June 2007 to support other survivors and campaign for the known, and available, technical solutions.

John still strongly feels that it is his public duty to raise public awareness of this H&S issue and help other survivors. He has attended 15 annual GCAQE (Global Cabin Air Quality Executive) Cabin Air conferences since 2006, 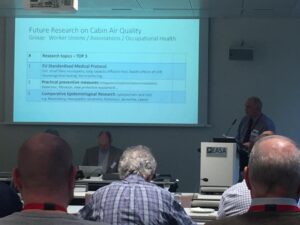 Since 2007 he has helped countless other aircrews and passengers globally understand a possible cause of their acute and chronic ill health.

John also began networking and corresponds with many other international advocacy groups such as Swiss based AerotoxicTeam, Global Cabin Air Quality Executive and many international aerotoxic medical, legal and scientific experts.

Both John and the Aerotoxic Association featured in “Welcome aboard Toxic Airlines” a now feely available factual documentary film in 2007 and helped to fund “A Dark Reflection”  later known as “Flight 313: The conspiracy” a fictional aerotoxic aircrew produced effort predicting the known and now available aerotoxic solutions in 2014, which is also now free to view.

John has mostly recovered from his severe neurological symptoms but in 2011 the UK NHS scored him cognitively at ½/10 but the NHS retested him in 2019 when he scored 7-8/10, an excellent recovery. John regained his Class 2 Aviation Medical in 2014, 2019 and 2020 and Flying Instructors rating in 2014 and briefly returned to flying and teaching.

John then discovered and pioneered Simulator Flying for public entertainment with Sim-Fly Norfolk from 2015-2019 with a simple novel flight simulator system & Combat flying for groups in Spitfire & Messerschmitt cockpits; but he decided to rededicate his efforts to Aerotoxic in April 2019, as human health is always paramount.

In September 2017 Michael Rawlinson QC stated publicly at the 11th annual Cabin Air conference in London that “Aerotoxicity (a newly created term by some lawyers of the published term: Aerotoxic Syndrome) was at its ‘tipping point’…” which is of significant public interest.

From September 2019 to March 2020 John freely toured Belgium, France, Germany, Switzerland, Italy and The Netherlands meeting many of the key Aerotoxic experts and finding out that French lawyers had at that time 100% evidence and that Aerotoxique Syndrome would be formally accepted by France as an Occupational Disease within two years.

On 30/31 January 2020 John attended the first EASA (European Union Aviation Safety Agency) ‘Cabin Air’ workshop in Cologne, Germany with other Associations/Unions, Airlines, Manufacturers, Researchers & Regulators. John was elected to present the Associations/Unions ‘wish list’ to EASA for some of the 1.5 million Euros of EU funding available for ‘further research’ into Aerotoxic Syndrome.

UK Public Service Broadcasters – the BBC did finally provide an annual update of Aerotoxicity again in February 2020 with a hard-hitting ‘File on 4’ programme on Radio 4 ‘Something in the Air’ & report  https://www.bbc.co.uk/news/stories-51633897

“After years of gathering evidence, 10 lead cases against four UK airlines are due at the Royal Courts of Justice this year. Unite, the union behind the action, says it wants the public to know about the aviation industry’s biggest secret. “An extraordinary amount of powerful evidence has been gathered,” says General Secretary Howard Beckett. The simple reality for us is that our members are at risk from low-level exposure and it is a simple reality that frequent fliers will also be at risk as a result,” he told me.”

from BBC Transport Correspondent Tom Burridge but once again, failed to mention the public work of the Aerotoxic Association Ltd. Charity. John very reluctantly returned to the UK in early March 2020 due to the outbreak of Covid-19 and wanting to see his children again.

John was interviewed live by the BBC Norwich in February 2015 on the strict condition that he didn’t mention the airlines he flew for (TNT & Flybe) or the words ‘Cover-up’.  Any future interviews with any media must only deal with the story of the 15 year long aerotoxic cover-up, alone.

As John has spent a significant part of his life in Norfolk UK – Investigation’s journalist and now Archant Chief Editor David Powles of the Eastern Daily Press wrote two excellent articles in August 2015:

As part of his work plan for ‘Solutions only’, John has decided to offer low cost, personal 1:1 consultation to any passengers or aircrews interested in finding out more about Aerotoxic Syndrome or flying in general.

John has been represented by many different Members of Parliament with by far the best being Conservative MP John Maples from 2006 – 2010; Conservative Jeremy Wright MP; Liberal Democrat Simon Wright MP and lastly Labour Clive Lewis MP who has not acknowledge any formal Aerotoxic Association Ltd correspondence since 2015.

In 2016 a letter was sent to HM Queen and a gracious reply was received. John had previously written to His Royal Highness the Prince of Wales (A former BAe 146 pilot) in 2007 and also received a courteous and full reply.

John feels strongly that it is his moral responsibility and public duty to do all he can to help others expose a covered-up matter of public health and is therefore in the process of updating by rewriting and abbreviating his 2014 book published by Pilot Press – “Aerotoxic Syndrome – Aviation’s Darkest Secret”  with a new book “How Planes Poison You! Aerotoxic Syndrome – Aviation’s Dirtiest Cover-Up” by John Hoyte & Brett Preiss (Australian/Dutch author) which was published on 1st April 2020 and was updated with all latest positive international evidence and republished on Saturday 1st May 2021.

Whilst his second flying book “A Tale of Two Ag Pilots” about his early flying career was co-authored with Captain Peter Lawton of Norfolk, who taught John to fly in 1977, and which was also published by Pilot Press in 2017.

John and other aircrew only wanted to fly safely in aeroplanes and the existing governments position of ‘No positive Evidence’ of chronic public ill health from a deliberately and fundamentally flawed and unsustainable cover-up position, where public health is paramount and is always claimed and where 100 years of positive evidence exists. 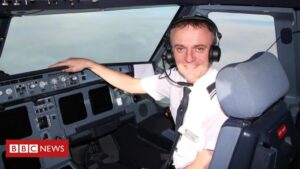 John has been contacted by countless members of the public from all over the world over the past 15 years and possibly the most significant was twin British aerotoxic pilot Richard Mark Westgate who contacted the Aerotoxic Association on 16th March 2012 and was advised to go to The Netherlands for specialist treatment with Dr Michel Mulder and his specialised Dutch team, which he did but Richard sadly died on 12.12.12 in The Netherlands.