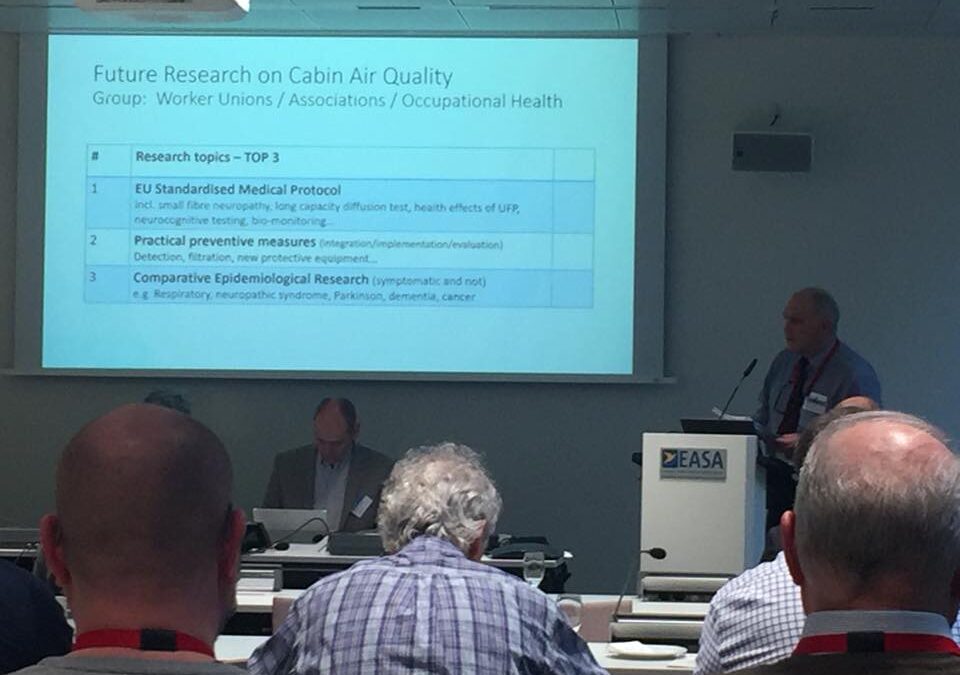 Questions of Public interest on 21 April 2020 include:

Aerotoxic Syndrome was first proposed in 1999 by a US Doctor and scientists from France & Australia after years of research to describe the human acute and chronic ill health caused by exposure to toxic oil fumes within the confined spaces of most jet planes, except for the Boeing 787 Dreamliner, in which the design flaw has been resolved by Boeing with different architecture.

With most jet planes grounded due to Covid19, now is a rare opportunity to fit the known and available technical solutions to ALL ‘Bleed air’ jet planes (except for the ‘Bleed Free’ Boeing 787) before mass flying begins again, based on the existing evidence and in the public interest.

Lo-cost British airline Easy jet are known to be trialling the known available solutions imminently and since 2016.

On 30/31 January 2020 EASA (European Union Aviation Safety Agency) hosted the first ever Cabin Air workshop at their Cologne HQ to fund 1.5 million Euros of ‘Further Research’ into the solutions for Cabin Air Quality (CAQ) and Aerotoxic Syndrome, which was first proposed in 1999.

The Global Cabin Air Quality Executive (GCAQE) 2006 and other key European aircrew Unions and Associations had presented extensive evidence to the open EASA workshop over two days, both formally and informally.

The ‘Further Research’ suggestions from all four groups to EASA from Associations/Unions, Airlines, Manufacturers, & Researchers can be read here:

Further information about the typical human ill health from accidents which are experienced by UK passengers (including children) can be read in this recent article by BBC Transport Correspondent Tom Burridge from 25 February 2020:

Fume events: The toxic gases that may be harming aircrew and passengers

Read about a recent US Flight Attendant legal case settlement on 31 January 2020 here.

John Hoyte issued the following quote in addition to his formal Statement dated 21 April 2020, which is available at www.aerotoxic.org

“There are around 1,000,000 frequent flyers and aircrew with Aerotoxic Syndrome in Europe alone, with around 135,000 in the UK and 34,000 in The Netherlands according to a published, 2017 Dutch study. Today must be the right time to start the process of fitting the known and available technical solutions to planes grounded due to Covid19 – in order to prevent further cause of mass public ill health in the future, which must be in the flying public’s best interest.”

Former BAe 146 Training Captain John Hoyte of Aerotoxic Association Ltd The Charity (2007) has been working with GCAQE since 2006; Swiss based Aerotoxic Team since 2011, EASA since 2020 and with many other international groups towards genuine free, open public debate of the known and now available solutions to be researched and then urgently implemented, on the balance of probability.

Captain Hoyte has also issued a formal STATEMENT dated 21 April 2020 inviting members of the public to recognise and support the work of the Aerotoxic Association and Charity, which is believed to be in the public interest.

John Hoyte may be contacted at office@aerotoxic.org for further evidence and serious media enquiries only.